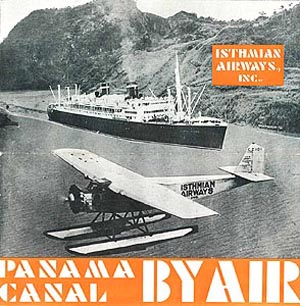 The Legacy of Seaplanes in Panama, Isthmian Airways

The story of Isthmian Airways begins on May 5,1929 when the inaugural seaplane flight took place from the port of Balboa to Colón, on a tour which took 30 minutes. The airline was founded by american civil engineer Ralph Ernest Sexton with a fleet of “Hamilton H-47” seaplanes. Captain Sexton had earlier taught himself how to fly seaplanes with Travel Air E-4000 seaplane he had purchased on Edo floats.

The airlines flights departed from the water near Pier 18 in Balboa where, by means of a ramp, passengers and light cargo reached or left the seaplane. On the Atlantic side the seaplane used the Folk River where there was a hangar for it. Flights left Balboa at 8am, 12pm and 4pm Heading for Colón and vice versa. The flight fee was $10 one way and $15 round trip but dropped to about $3 during 1932-1933, when the effects of the Great Depression were still being felt. In addition to the trips to Colón and area, Isthmian Airways also provided non-scheduled flights to such places as Taboga, the Pearl Islands and other places attractive to tourists and fishermen.

Here is how the 1930 Isthmian Airways brochure, titled “Panama Canal By Air – Isthmian Airways, Inc.”, describes a flying experience with the airline. And with Elevair over 90 years later, there is really nothing that we would want to change!

The Greatest Engineering Feat In History – To view from the air the connecting link between the Atlantic and Pacific Oceans is to realize the true greatness of this tremendous engineering achievement on which three hundred and seventy millions of dollars were spent for construction.  Only from the air can the extent and magnificence of the three great locks be appreciated, and the 168 square miles of Gatun Lake, Culebra Cut, and the territory for from ten to twenty miles adjacent to the canal.  A flight over the Canal, from ocean to ocean, provides an experience never to be forgotten – a trip which must be taken while you are in the Zone.

Land of Romance and Adventure – Here Morgan and his buccaneers once roamed – a short air trip from Balboa brings to view the beautiful city of Old Panama, sacked by Morgan, but still defying time and tropical growth.  A half hour flight from Cristobal brings you to the harbor of Porto Bello, and old Spanish forts abandoned long ago.  The ideal seaplane landing affords the opportunity of a trip ashore to inspect and photograph these historic ruins.

Comfort and Safety – On regular Canal flights, Isthmian Airways seaplanes follow the route of the canal from coast to coast – a continuous calm water landing field the entire trip.

Ideal Flying Weather – Panama provides perfect flying weather every day of the year – Isthmian planes have flown every day without exception since inauguration of service in May 1929 – a distance equal to six times around the world with landings every 50 miles.

The airline was an astounding  commercial success, growing to a fleet of 7 seaplanes flying every day. While there are no records of the number of passengers flown in 1929, “Airline Timetable Images” calculates that 19,000 used the airline in 1931, 45,000 in 1931 and 50,000 in 1933.  Historical interviews with key personnel from the operational days estimates 6,366 in 1932 and 9,666 in 1933. We suppose the truth lies somewhere in between,  but regardless a strong and healthy airline.

Internationally the airline was getting noticed for its success. It was published in 1936 in Ripley’s “Believe It Or Not” that the Isthmian “Chief Pilot” (and the best known commercial pilot in Panama at that time) “Captain” Burton Brown Barber, had made 5,504 non-stop flights from coast-to-coast, Cristobal-Balboa Canal Zone”. An enviable record even today.

A Great Business is Squashed
But such a magnificent idea and an independent business could not last long under the regime of the Panama Canal Zone government of that era.  Pan American Airways forced the Isthmian out of business, claiming that the concept had been stolen from their now employee (and son in law of an very influential U.S. senator) Charles A. Lindbergh during his earlier visit to Panama.

Over 90 years later, we are honored to resurrect a seaplane airline in Panama and we understand the significant legacy we will continuing.

Acknowledgment to La Prensa for their article on Isthmian Airlines. Also to an article in “Panama History Bits & Pieces, The Little Airline That Could” which makes worthwhile reading for its detailed chronicling of this amazing Panamanian airline endeavor.