The Real Pirates of the Caribbean, An Elevair Seaplane Tour

Forget Everything You Thought You Knew About Pirates of the Caribbean

You’ve read the storybooks and watched the movies. Forget all of that fiction as we visit three former pirate haunts in the central Caribbean of Panama by seaplane. Learn from our expert historian guide of the true reality of two hundred years of pirate and buccaneer history. The ports and forts we visit were locations of staggering violence, slavery, millions in stolen riches and almost inevitable death on the Caribbean coast of Panama. Sir Henry Morgan, Francis Drake, William Parker and the violent and brutal French pirate l’Olonnais all roamed and plundered this small region, and most met their deaths in these waters.

Nombre de Dios, Where it All Started

Your seaplane tour departs Panama City and we fly from the Pacific to Caribbean across the Isthmus of Panama where for centuries almost all South American gold and silver was transported by mule convoys. Our first seaplane landing is port of Nombre de Dios, the first conquest of the pirates in the early 1500’s. Today the settlement continues as the oldest continuously inhabited European settlement in the continental Americas.

Portobelo, a Magnet for Pirate Attacks

Our second stop is the beautiful bay of Portobelo. first discovered by Christopher Columbus in 1502. By the 1570’s this Spanish fort and settlement became the major port for all of the Americas for well over a hundred years. The riches held within Portobelo were a magnet for attacks by Sir Francis Drake who in 1596 died of fever and dysentery and, according to legend, was buried in his full armour inside a lead coffin in the bay of Portobelo, which, after numerous investigations, could never be found. 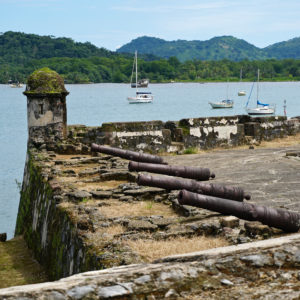 After Drake’s forays in Portobelo came the pirate William Parker, who in 1602 carried out his first attack on the newly founded city. But without a doubt, the one who achieved success and, also, relatively quickly, was the English privateer Henry John Morgan. Arriving in Panama with 460 men and nine ships, Morgan initiated a brutal and violent assault on the Spanish settlement of Portobello. Using a group of elders, nuns and priests and human shield, Morgan’s attack was without mercy or compassion.

Portobelo was subject to numerous periods of destruction and looting suffered and over the years lost its importance. In 1739 the English Admiral Edward Vernon, as commander-in-chief of all British naval forces in the West Indies, captured Portobelo. Vernon looted and completely destroyed the settlement and fort. After this last attack the reconstruction of Portobelo began, restoring the most emblematic buildings such as the Royal Customs Office, as well as the forts, to try again to protect the city again from future attacks that did not happen.

Fortress of San Lorenzo de Chagres, Launch of the Attack on Panama City

Your seaplane departs Portobello and after flying west and over the large present day ports of Colon we land in the water of the Chagres River, location of Fortress of San Lorenzo de Chagres. After Drake had conquered Portobello and travelled to England, Drake returned in 1671 to Panama with a fleet of 38 ships. Upon his arrival he assaulted and destroyed the fortress of San Lorenzo de Chagres and, through the Panamanian junga between vermin and tribes trying to fight with them, he managed to reach Panama City on the Pacific Ocean.

After conquering the Panamanian capital, Morgan stayed for about a month, burning and leaving behind rubble from a city that at that time had approximately a total of 5,000 homes. The loot he achieved during his stay in the capital consisted of 175 caballerias laden with gold, silver, and precious stones; and 600 prisoners and slaves. After this he returned back to the Caribbean Coast by the Chagres River and, after further plunder, he sailed for Jamaica with the precious loot obtained in Panama City and the value of the ransoms of at least half of the prisoners.

The ruins of Fort San Lorenzo remain as a sentinel of the days of pirates and conquests. As we walk through the remaining coral stones walls, as strong as granite, it is easy to visualize the amazing history that transpired within this area.

We then depart in your seaplane from the Chagres River and fly alongside the Panama Canal, today the connecting link for the world’s marine traffic between the Atlantic and Pacific Oceans. Your seaplane lands back in Panama City, with your memories and stories of the Real Pirates of the Caribbean. Be sure to visit the runis the of the original Panam City that was attacked by Morgan, Panama Viejo as well as the remaining walls of the “New Panama City” at Casco Viejo.